Vindaloo - Don't be scared to give it a try 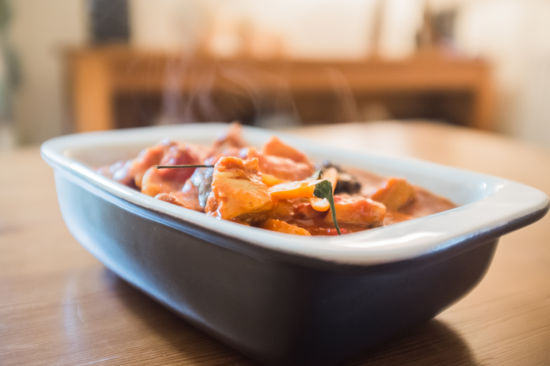 We want to dispel the myth that the Vindaloo has to be ‘melt your mouth off’ hot, and encourage both spice-fiends and Korma-lovers alike to give this Goan classic a try.

The idea that a Vindaloo has to be blisteringly hot is one of the changes this curry has seen only since it’s re-imagining in British curry houses. As with all our mixes, we add the chillies to order, so if you want your Vindaloo mild or medium we can accommodate this!

The traditional Vindaloo is an adaptation of the Portuguese wine vinegar and garlic dish ‘carne de vinha d'alhos’. Once the dish was introduced to Goa, the wine vinegar was substituted for palm vinegar and Kashmiri chillies as well as a couple of other new spices were added. Our Vindaloo Curry Pack has a healthy dose of garlic and ginger and a tang coming not only from the vinegar, but also tamarind in the paste we use. This tang is balanced with a fragrant mix of fennel, black pepper, cloves and star anise.

The Portuguese Christian influence on the traditional Vindaloo meant that pork was commonly the main ingredient. Classic Pork Vindaloo recipes call for the meat to be marinated in vinegar, spices, garlic, ginger and sugar before cooking. Traditionally, the cooking would then happen in earthenware pots over a low fire. In keeping with tradition, our curry pack works wonderfully with pork, especially pork belly, which adds a rich flavour and benefits from slow cooking. Goa's position on the coast also means that a lot of fish is incorporated into Goan cuisine, so if you don't fancy pork, try this authentic Mackerel Vindaloo recipe for something different that'll blow you away!

Whether the Vindaloo is your favourite curry or you're trying it for this first time, we would love to hear your comments and recipe ideas. You can get in touch by email or find us on Facebook, Twitter and Pinterest.