Due to unprecedented demand please allow up to 7 working days for orders to be dispatched - see here for more details.

Posted on Thursday, 24th January 2019 by Dana in Top Tips 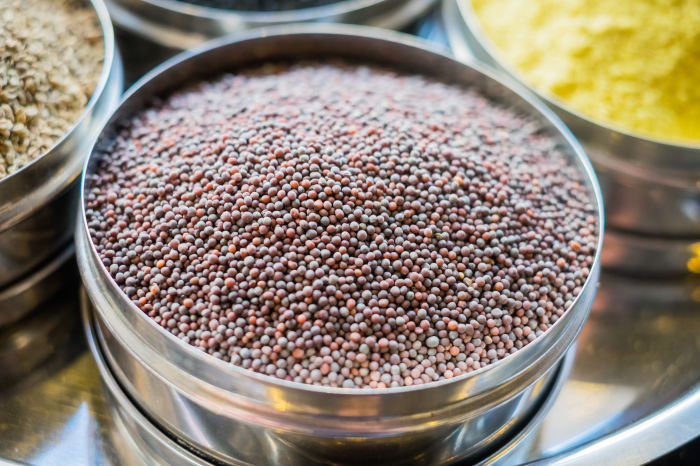 One of our most frequently asked questions here at Rafi's HQ is, what on earth is the difference between yellow, brown, and black mustard seeds? So we thought we would tackle this issue head on…

It is thought that mustard derives its name from the 13th century French method of preparation: the must of young wine was mixed with the ardent (that’s burning, to you and me) spice to create a condiment that we would recognise today.

In modern cooking, three main varieties of mustard are used.

Brassica nigra is black mustard and originated in the Mediterranean, though thanks to human migration, it is now found all over the world - the exception being the chilly North of Europe. With an exceptionally strong flavour, black mustard is not popular outside of India, and brown mustard is often substituted as a more palatable alternative. If you are determined to get that zing, however, then simply use 1.5 as much brown mustard for every teaspoon in your recipe.

Brassica juncea or brown mustard is the most commonly used variety and has a pleasant almost nutty flavour when heated. Brown mustard seeds are an important ingredient in many pickles and preserves but have a variety of other uses as well. In India, mustard seeds are also fried in oil with cumin seed and curry leaves to temper vegetable and lentil dishes (such as a Tarka Dhal) in their final cooking stage.

Yellow mustard seeds are actually from the seeds of the white mustard plant, Sinapis alba, with alba meaning white. This mustard plant also originated in the Mediterranean area and can be cultivated in colder climates which may be a factor in its popularity. The white mustard plant bears light tan seeds that are a little larger than brown mustard seeds. These end up as the bright yellow mustard you probably apply generously to your hot dogs due to the addition of turmeric or dye.

Whatever form of mustard you use, I am certain you will agree that life simply wouldn’t be the same without it!