What types of Indian Bread are There?

Posted on Saturday, 22nd February 2020 by Dana in Top Tips 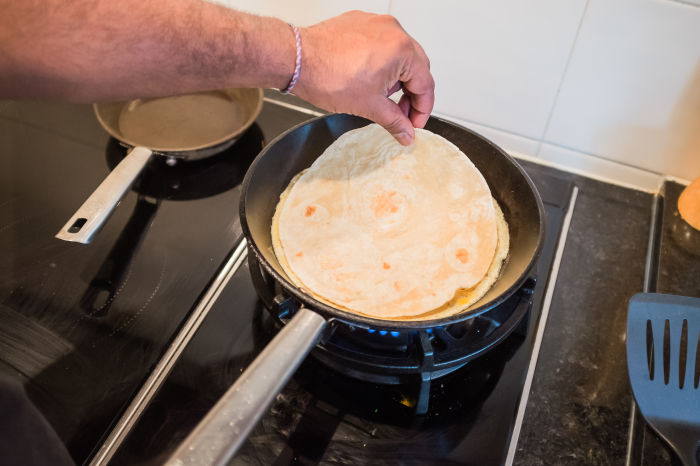 Bread is a staple of the Indian diet, with few meals being served without it. At some point we will enter into the age old debate of rice vs bread, but for now, let’s consider the four essential bread types (allowing for subcategories, of course).

Before we start exploring the various types of Indian breads you need to try, it’s worth taking note of the various flours that are used in their recipes. A broad range of flour is used in India; although the majority of bread recipes call for rice, chick pea, lentil and wheat flour.

This is an ideal ingredient for those seeking a gluten-free option, with lentil flour also offering a high source of natural protein. Gram is one such flour, with chickpea as the central ingredient. If you fancy making your own dhal flour then Urid dhal is a good option, as it is easy to grind; in fact it is what we recommend if you are planning to make your own Dosa this Pancake Day!

You’ve plenty of choices when it comes to wheat flour with Indian breads. There’s Atta, a whole wheat variety that’s used in all manner of Indian flatbreads like naan, roti and chapatti. Then there’s Maida, a finely milled wheat flour that is used more commonly when baking sweet pastries. Rounding off the key wheat flour varieties is Shooji, more commonly known as semolina.

Made from either brown or white rice, rice flour is a recipe staple of many breads you’ll find in the south of India. Looking for a gluten free bread? Try this Akki Roti recipe!

The word chapat means “slap” in Hindi, giving us an idea of just how the Indian flatbread is made. The unleavened bread is formed by slapping and stretching out the dough between the palms of the cook before finding itself on a tava??”a flat, disc-like frying pan.

But the real beauty of the chapati is it's ability to pair with virtually any saucy curry. It's mild, nutty flavor, along with it's relatively healthy preparation, makes it a common staple food in India; it’s an everyday bread if you will.

Another popular flatbread originating from the northern region of India, paratha remains a staple food of the region to this very day and is particularly savoured as a snack. It’s name refers to the layers of cooked dough that make up the final form of the bread, with paratha proving a more substantial alternative to the likes of chapatis thanks to more folding during the preparation stage and more generous layers of ghee and/or oil before cooking.

We couldn’t have neglected to include naan on this list. This oven-baked bread is consumed the world over and is made with much the same method as traditional pita bread. Although the preparation of the dough is similar to that of roti, naan bread is cooked in a tandoor oven. To enjoy it at its best, naan should be eaten hot of the oven and brushed with a little butter or ghee. It’s often served as an accompaniment to larger meals, either as a side to pick up ingredients or as a more substantial foodstuff in its own right with generous fillings. Of course we have a recipe for making your own naans, but we also sell the Previn's range of breads; From the first time the team tasted a Previn’s Naan we knew we’d struck gold! It only takes one glance to see that are restaurant quality and, whilst it’s not the size of a toddler (like some well-known restaurant chains), it’s nearer enough to a newborn (at 30cm) and certainly makes a brilliant accompaniment to a curry.

This thin and crispy circular bread is usually made with a seasoned dough, with black gram flour the preferred base. Once the dough is formed and rolled, it’s cooked on a dry heat source or fried until the signature crispy disc of a papadum appears. Other types of flour can be used to make this popular accompaniment, with rice, lentil and chickpea based flour all common ingredients. Here is our definitive guide to cooking papads!